If you had to guess how many thoughts we had in a day, how many do you think we have?

That’s a lot of thoughts!

But here’s where it gets even more interesting…

So it’s no wonder that most people read a book or attend an event, and no matter how amazing the content is, they fail to implement it.

Imagine for a second that our thoughts to be a river and our brain to be the rock that the river runs through. The river breaks through the rock not because of it’s force, but because of it’s consistency. That’s exactly how our

… No wonder it’s so damn hard to change the way that we think!

The first step is to be realistic about how hard it is to change your thoughts and habits. When you’re honest with yourself about that, you can start to mentally prepare for the shift in mindset and start moving forward.

You will need to create new habits, new thought patterns, new ways of talking to yourself and commit to immersing yourself into whatever it is that you’re committing to.

When you’re setting new habits, don’t focus on setting 20 different habits. In ‘The Power of Habit, Gary Keller asks us to answer the clarifying question:

“What is the one thing that you can do that by doing it, everything else becomes easier or unnecessary?”

That is your keystone habit – one habit that affects multiple aspects of your life. In my personal life, that keystone habit is working out. On the mornings that I work out, I eat better, manage my time better and have more energy.

In my real estate business, that is focusing on lead generation. For you, it could be something completely different. If you’re constantly asking yourself the clarifying question, you’ll know that you’re making effective use of your time.

In the Power of Habit, Charles Duhigg talks about how our habits work and what causes us to execute on them. Before I explain it, here’s what it looks like: 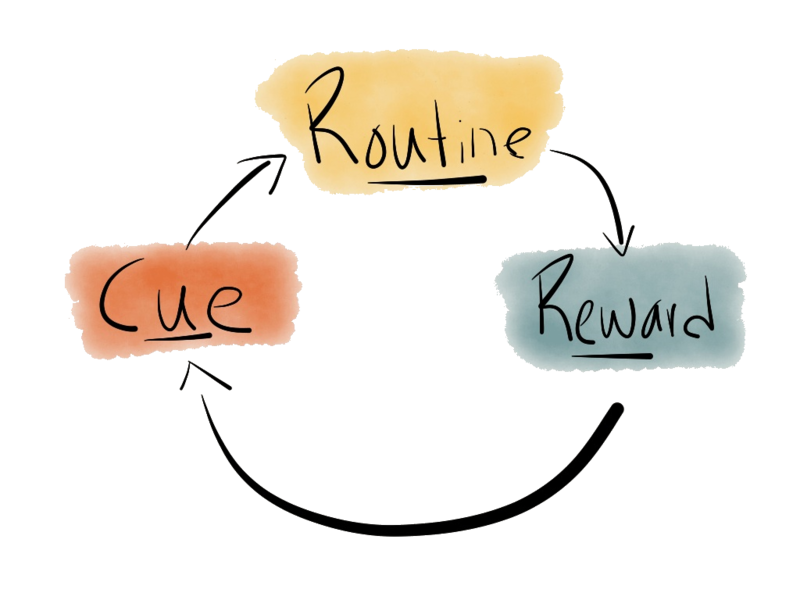 The example that stuck with me the most was when he talked about how toothpaste first started selling. Apparently, back in the day, we didn’t use toothpaste (ew).

There was a marketing campaign that used people licking their teeth and feeling the ‘film’ (you know, that layer of grime when you wake up in the morning).

That was the cue.

In the campaign, they used people brushing their teeth (routine) and then licking their teeth after and the layer of film being gone (reward). If you think about it, that still applies to our lives now.

When you’re trying to change your habits, keep the cue and the reward the same – just change the routine. Think about your existing habits, good or bad.

Let’s say your bad habit is checking social media non-stop. Your cue might be the notification that pops up, boredom or avoidance of doing something else. The habit is to check your phone and the reward is the instant gratification of having all of those likes and comments.

Keeping the cue and reward the same, maybe you change the routine to standing up to stretch, for example. You might have a hard time making the switch to stretching every time you have the urge to check your phone, but after a week or two, that awkward feeling will go away and standing up to stretch will be your new normal.

Think about your own existing habits. What’s the cue? What’s the reward? What routine can you replace your existing routine with?

This works with creating habits too. Let’s say you want to go to the gym every morning at 5am.

Your trigger might be that you put your clothes next to your bed and your shoes on the floor so as soon as you get out of bed, you are forced to look at them.

To take it a step further, you might even move your alarm across the room so that you’re forced to get up to turn it off and step over your gym stuff.

The routine is the workout and your reward will be that you feel good after your workout.

How can you use the habit loop to help you?

Discipline Is Only Temporary

A lot of times, when someone is experiencing great success, it’s very easy to think that they’re lucky or they’re naturally ‘like that’ or that they have so much discipline.

The reality is that discipline is only necessary until it becomes a habit.

Think about brushing your teeth for a second – how much effort does that take? Not a whole lot.

It’s just what you do.

Once habit kicks in, it will feel weird not to do it.

On the opposite hand, bad habits steal your dreams one ‘I don’t feel like it’ at a time.

Waiting for inspiration to strike is the fastest way to end up 65 years old, wondering why you never pursued your passions. Inspiration is for amateurs.

The compound effect is doing it even when you don’t feel like it, just because you’re supposed to do it.

You may not see results right away and that’s ok.

Here’s another way to look at it: if you had everything you wanted right now and got it easy, you would be bored with life and you would never grow.

The struggle of getting there is going to be what makes you the amazing person that you’ll end up being.

How To Change Old Habits + Develop New Ones

Go Back To Your Big Why

Change is really uncomfortable because our brains don’t like change.

If we’re going to force ourselves to make changes, we’re going to have to have a reason big enough to be more powerful than the ‘I don’t feel like it’ feeling.

We have to make the pain of staying the same greater than the pain of changing… and the only way to do that is to focus on our big why and how much our lives will absolutely suck if we don’t achieve our goals.

Too often, we set goals with the mindset of ‘if I don’t achieve it, it’s not the end of the world.’

Unfortunately, that hurts you more than helps you.

If it’s not the end of the world when you don’t achieve your goals, you’re not going to go through the massive discomfort required to achieve those massive goals of yours.

Change The Way You Talk To Yourself

Before you roll your eyes, think about this for a second.

You talk to yourself every day as it is, affirmations are just getting more intentional about it.

I was having lunch with a friend recently who was talking about how she was dating someone who told her that she didn’t love herself because she was always so quick to put herself down, even if it was just in a joking way.

She continued on to say that she realized he was right and that she had been beating herself up over everything.

She would never talk to a friend the way she talked to herself, so she wanted to learn how to start changing that.

You might not be able to change your first thought, but you can control your second thought.

Here’s your assignment: take a piece of paper and draw a line down the middle of the page.

On the left side, make a list of all of the negative things you normally say to yourself.

No one will see this but you, so be honest.

On the right side, right something positive that you can replace it with. Let’s say you’re unhappy with your weight.

Instead of writing “I am skinny” on the right, start the sentence with “I am committed to getting in shape, eating right and living a healthy life.”

By taking this approach, you won’t feel so ridiculous about lying to yourself.

When you’re done, put it in your phone and everywhere that you will see it regularly.

Before you go to bed and when you wake up, spend five minutes or so reading those “I am committed to..” sentences out loud and if you catch yourself with those negative thoughts, replace them immediately with the ones you’re retraining your brain with.

Out of sight, out of mind, right?

Keep your big why in front of you along with reminders for your new habits.

If you’re technology-driven, use an app that will remind you to do your new habits.

If you like paper, use a simple tracker that you color in when you complete the new habit.

Either way, this will benefit you because it will become a competition with yourself not to break your streak.

There are dozens of habit apps out there and will be a matter of preference for which you like most as most of them have very similar functionality.

The tracker will help you stay on track and keep you accountable to your new habits, but that’s not enough.

Put pictures of your goal everywhere, obsess over what you’re trying to achieve and focus on taking massive action.

The trick here is to focus on what it will be like once you have it, not the journey to get there.

If you focus on the journey, you just might think yourself out of doing it.

FEED YOUR BRAIN EVERY DAY.

In order to stay in this new mindset, you’re going to have to put effort into it.

What you’ve been doing isn’t enough.

Start focusing on your personal growth.

In order to do and have the things you say that you want, you have to be the person you need to be to get it.

That means constantly growing and learning.

If you read 10 pages a day, you’ll read 18 books in a year… That’s 18 books more than most people read in a lifetime.

The trick is to read about specifically what you’re working on. If you’re opening a gym, read everything you can about people who’ve done it before you.

Not only will you cut your learning curve exponentially and you will start applying that information.

What you’ll find starts to happen is every time you face a challenge, the first question you ask yourself is ‘what book can I read that will help me with this?’.

It’s an incredibly freeing feeling when you realize that every challenge that you will ever have has already been solved, you just have to find the answer.

My rule is always 5 books.

Anything that I want to learn, read 5 books about it.

That will give you enough background knowledge to cut down some of the learning curve, help you develop your own thoughts and opinions on the topic, give you some executable actions from reading and will force you to think bigger than your original goals.

When I wanted to get better at building habits, I read The Power of Habit, Miracle Morning, Grit, The Compound Effect, The 12 Week Year and The One Thing.

All of those have shaped who I am as a person today, simply because I read them back to back and started applying what I learned.

When you set a goal, break it down to the very basic activities.

If your goal is to lose 20 pounds in 6 months, that means you need to create about a 400 calorie deficit on a daily basis.

Knowing what your specific, daily goal is will keep you on track for your goal and keep you from getting too far off track.

You have already reported this
Clear Clear All