Everything in your life is there because you allow it to be there.

If someone is treating you like shit, it’s because you allow them to.

If your company isn’t growing as fast as you would like, it’s because you’re not taking massive action or you’re not being effective.

If you feel like you just can’t get your life together, it’s because you haven’t committed to creating powerful habits to keep everything together.

If your relationship is failing, it’s because somewhere along the way, you stopped doing the things that made you relationship successful in the first place.

If your life sucks, it’s because you’re choosing to only see the negativity in the world.

I get it… Being a victim is easy.

You don’t have to DO anything to be a victim, you just have to exist.

Being a victim is easy because you don't have to do anything except exist. Click To Tweet

… But having a victim mindset drains you.

It drains your relationships because people get tired of hearing about how the world is against you and being a victim leaves you in a state of hopelessness.

Hopelessness is a victim’s mindset.

Now, the first step to fixing your mindset is realizing that you’re stuck in the mindset.

In fact, you may not even realize you have a victim’s mindset…

We have about 90,000 thoughts in a day and 95% of them are the same habits we had yesterday and the only thing that can change that is for something to happen to break that thought pattern.

… What are you going to focus on?

… What does this mean?

… What are you going to do?

Tony Robbins gives the PERFECT example of this.

Watch it. You’ll thank me later.

The moral of the story is that Tony accepted the stranger’s offering as an act of kindness and treated it with gratitude.

Do you see how a simple change in perception can change pretty much anything?

Victim Mindset: Not Asking Questions + Accepting Things The Way They Are

The easy way is to accept things the way they are and accept them at face value.

Have you ever said something that someone perceived differently than you meant and then wouldn’t let it go?

That’s exactly what you’re doing every time something happens and you automatically assume the worst. 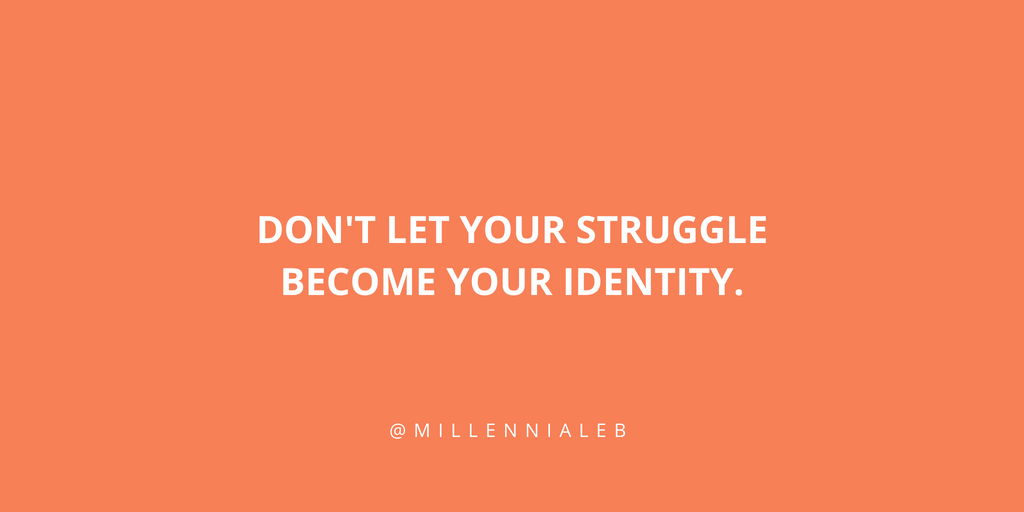 You just accept it the way it is.

Let me ask you…

How many hours have you spent overthinking something and then coming up with a story about that thing that happened?

You make an ass out of u and me.

Your questions shouldn’t be passive aggressive or out of sarcasm, you should be asking out of complete curiosity.

When you “assume innocence” and give people the benefit of the doubt, chances are, you’ll find that whatever they said or did wasn’t meant the way you percieved it.

When you ask powerful questions and bring clarity to the seemingly complex, your relationships will start to blossom and become more genuine and you will inevitably start to be seen as a leader.

In the post I wrote about how my epic failure made me a better leader, I wrote all about the questions I’ve learned to ask those I lead which has MASSIVELY changed my relationships:

A victim who is fighting reality will say stuff like…

“That’s not how we do things…”

Statements like these generally come from a fear of or resistance to change.

Just because something worked in the past, doesn’t mean it will continue to work…

Remember, the only thing in life that’s certain is change…

So embrace it or you’re going to have a tough time in this world.

It’s perfectly natural to think about the effects of this new change, however, that doesn’t mean that you should be resisting it.

If you’re resisting change, keep an open mind and seek to get clarity on what those changes would entail. You might use language like…

“Let’s walk through this together…”

By focusing on possibilities and seeking to get clarity, you’ll find that everything becomes easier.

Giving up the victim mindset isn’t a one time decision… You’re going to have to work at it, mess up and say the wrong thing.

Victim Mindset: Blaming Everyone And Everything Else

There is NO faster way to make your relationships crash and burn than to NEVER take responsibility for the things that happen in your life.

This is as true for little things as it is for the big things.

In fact, I would argue that the little things are MORE important than the bigger stuff, like when you’re late because everyone else is a terrible driver or your boss is harder on you than your coworkers.

Blaming everyone else for things might seem like the easy thing to do but it puts a HUGE strain on your relationships because everyone else bears the burdens for your struggles.

“If everyone would just do their job…”

“It didn’t work because of the economy.”

“The market wasn’t ready for it…”

“Why didn’t you do something?”

Take ownership by bringing energy and focus to the situation.

Even when someone else IS actually responsible for whatever misfortune has happened in your world, take ownership anyways.

Note: I did not say blame yourself.

Taking ownership means recognizing that you have the power to change whatever happens next. Blaming yourself puts you right back into this victim mindset.

Taking ownership means recognizing that you have the power to change whatever happens next. Click To Tweet

“I have to do something.”

“This is my responsibility.”

I know this is a lot so I created a cheat sheet for you to use that will help you put all of this into action:

That means if you’re really serious about your goals, you’re either going to step up to the plate or you’re going to make excuses why you can’t have it.

… And quite frankly, excuses aren’t going to pay the bills and they’re not going to build relationships.

“I was never given a chance.”

“I did what I was supposed to do but it didn’t work.”

“I can’t think of anything else to do.”

You’re not going to get recognized or rewarded for your effort, my friend.

“Almost” isn’t going to help you achieve your goals…

So from this point forward, there is no try… Only do.

As a leader of this incredible community, I have frequent conversations with our members and students about their crazy goals and we often talk about taking minor adjustments they need to take to actually achieve them.

“Is that still the goal?”

“What have we tried so far?”

“Why didn’t those efforts work?”

“How do we put that into action?”

“What are my options?”

“How can I make that happen?”

Victim Mindset: Waiting, Hoping and Wishing For Things To Happen.

Your empire isn’t going to build itself.

Victims will throw their hands up and wait for things to happen for them, then get upset when they don’t happen the way they want.

“The proof will be in the pudding.”

Make a plan and execute on it with ninja precision.

When you have crazy goals, things are going to go wrong…

You just have to decide to pick yourself up, find a solution and move forward.

You know when you’re giving someone advice and no matter what you say, they find a reason why that won’t work?

… and then you’re like, “why did you even ask if you weren’t going to take any of my advice anyways?”

What that person is doing is putting up a wall and rejecting any and all potential solution.

… Or maybe the person who is constantly deflecting is you.

This generally happens when you’re spending more time focused on the problem than the solution.

Being the victim is easy because you don’t have to think, you only have to follow your emotions.

The problem with that is it will ALWAYS leave you stressed, feeling like you can’t get your shit together and in a constant state of hopelessness.

Every single person in the world has weaknesses.

… Even the people you idolize the most and think are perfect.

I LOVE Beyonce and I’m like 100% certain that she’s crazy. I mean, you don’t get that successful without being at least a little crazy, right?

Your weaknesses are not unique to you.

Identify and focus on your strengths.

If you’re having a hard time recognizing your strengths, it’s probably because they come so naturally to you that you don’t even realize that you’re good at it.

Start looking for solutions rather than problems and when someone offers a suggestion, don’t deflect… Accept it, try it and then give your feedback.

Learning new ways to think and speak is going to require constant effort on your part to change your mindset. To help you with that, I’ve created a free cheat sheet that I recommend that you hang at your desk, on your fridge, on your bathroom mirror and anywhere else that you look frequently enough.

Having it constantly in front of you will help you ensure that you’re consistently reminding yourself that you are not the victim that you used to be and that you are going to be a creator of your life instead.