Networking works… If you work it.

It’s a skill that most people never really learn and are sort of just thrown into the world to figure it out.

At it’s very core, networking is connecting with people and being a resource for them which ends up leading to income.

That little mindset shift from “I’m networking for a sale” will change your whole strategy.

So let’s break down the six most common mistakes people make when they’re networking:

It feels like you have to force yourself to open up to a complete stranger when you have no clue what their intentions are.

You’re making yourself vulnerable with the risk of being taken advantage of… and that’s terrifying. 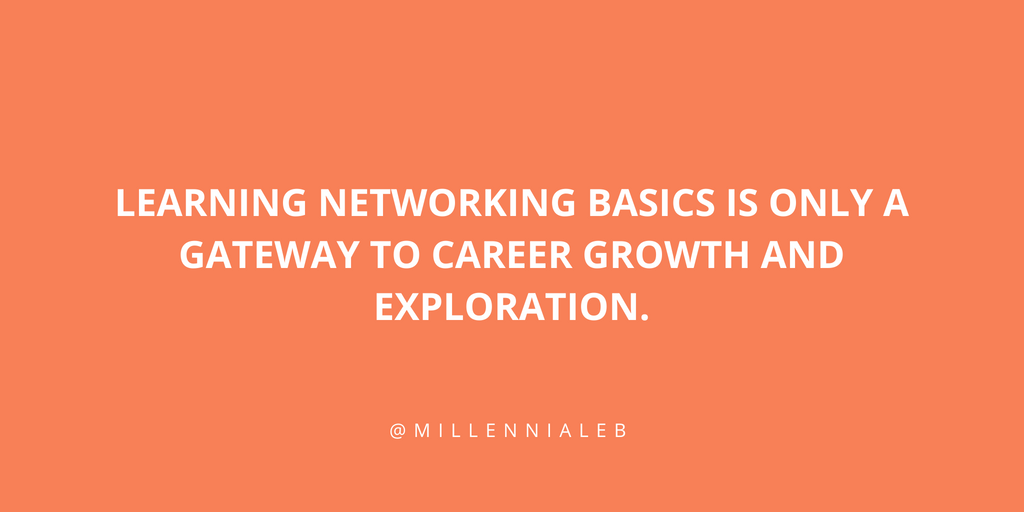 If you’re like most people, that’s the deep-seeded mindset about networking.

That means if you’re already opposed to meeting new people, you’ll have negative feelings towards building relationships, which means that you won’t do it and as a result, your network will be smaller and you won’t have the powerful connections you need to reach your goals.

… You get the point.

Start by changing your mindset about meeting new people.

Yes, you’re going to have to let your guard down to have genuine conversations… There’s no way around it.

For the sake of the length of this post, I’m not going to get crazy into detail here because I wrote an entire post about how to do that:

2. You Have a ‘Small Circle’ Mindset

Our culture encourages us to restrict our feelings, act like we don’t care, keep our friends close and forget about everyone else.

The people closest to us are what we call strong ties — these are our friends, family and coworkers.

That’s what it’s all about, right?

No New Friends = No New Money

By keeping your “small circle”, you’re adopting the mindset of the poor.

While I was doing research for this, I came across an article that says…

“Economic uncertainty also leads to the search for contingencies and poorer people invest far more in building multiple strong ties who will directly help them if they are in difficulty. However this may serve to anchor their status further and reduce the chance of upward social mobility. Upper class people are more relaxed about weak ties and so tend to have more. However, they have to resort to expensive clubs and other filtering mechanisms to find ‘people like them’ with whom they can build stronger ties. The modern approach to business networking is based on the principle of weak ties: having a wide range of acquaintances can be far more helpful than having just a few good friends.”

In other words, if you want to make more money, you need to have more connections.

They say that you’ll be the same person five years from now that you are today except for the books that you read and the people you meet — your acquaintances (also known as weak ties) encourage you to meet new people who you wouldn’t have met otherwise and they share stories and perspectives that push you to think bigger and they create opportunities for you to think differently. 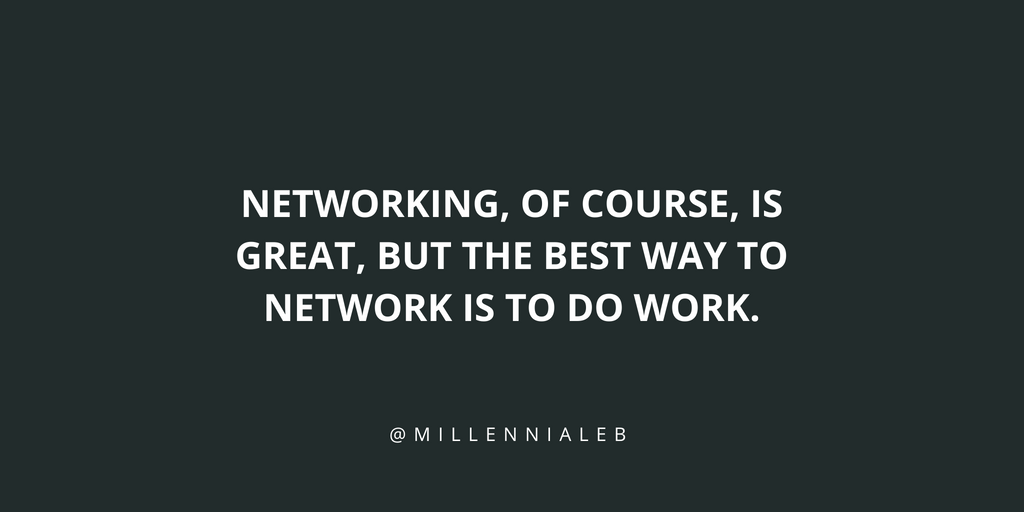 With this new perspective, you’ll start to see yourself become more dynamic and innovative.

Now you’re probably like ok, ok… I get it! I need to build relationships with more than just my friends… But where do I start?

With your weak ties!

You know… Those acquaintances who you might connect with on social media and like their posts but probably don’t speak to in person because you don’t know if they’ll actually recognize you?

Just so happens, I have a blog post for that too!

3. You only reach out when you need something

Pretty please with a cherry on top don’t do that.

I stopped answering her messages because it’s draining.

My thoughts: how about no? I’ve talked to you once in my life.

“Hey, I’m having an event for ___ and I see what you’re doing with MEB so I wanted to invite you”

My thoughts: Ok, so why have I never seen or heard from you in my life ever? If you love what we’re doing, why haven’t you been to an event?

If I had a dollar for every time someone did this, I would be rich.

They’re asking before they’ve ever built rapport or given anything first — they haven’t earned the right to ask for anything in return.

Let me introduce you to the diamond rule — give 10x more than you’ll ever need to ask for.

When you focus on giving more, people will jump at the opportunity to help you… and believe it or not, that’s also where introverts shine over extroverts.

When you focus on giving more, people will jump at the opportunity to help you. Click To Tweet

That’s not to say that extroverts aren’t givers, however, introverts are wired to build deep and meaningful relationships whereas extroverts are perfectly content talking to anyone.

The people in my network who ask for favors will get whatever they ask for from me plus some.

… Not only do I subscribe to their channel, I’ll share it, talk about it and give feedback.

Oh, and did I mention I have another post for this too?

Maintaining your network doesn’t have to be crazy complicated or difficult… You can do it in about an hour a day (and if you’re looking to make networking as part of your strategy to grow your business, don’t tell me you don’t have enough time!)

4. You Have Commission Breath

If you sound desperate for the sale orrrr you can’t stop talking about the features and benefits of your product or service, your ideal client might be nodding politely but they checked out the second they sensed your desperation.

If you sound desperate for the sale orrrr you can't stop talking about the features and benefits of your product or service, your ideal client might be nodding politely but they checked out the second they sensed your desperation. Click To Tweet

If this is you, I hate to break it to you but you, my friend, are the used car salesman that everyone avoids.

Don’t get me wrong…

You DO have to sell.

… but if you’re not hitting your goals and are pushing hard, it’s because you’re turning people off by your approach.

Instead of trying to force a sale, spend more time identifying the need… Focus on learning what they need instead of what you can sell.

Instead of trying to force a sale, spend more time identifying the need... Focus on learning what they need instead of what you can sell. Click To Tweet

What I’m about to tell you is going to change your whole life, you ready?

People will tell you exactly how to sell them if you just ask the right questions.

Instead of focusing on you and your product, learn to ask better questions and you’ll quickly find that people let their guard down way faster.

It feels less salesy and comes from a place of “I can help” rather than “I can sell”.

I talk a wholeeee bunch more about meeting people and how to initiate that conversation in this post:

Here’s how most people network…

… They go to an event

… Collect a bunch of business cards

(Just for the record, attending events isn’t the only way to grow your network!)

99.999999999% of business that comes from networking does NOT come from the first meeting.

That means you have to follow-up.

Start by using a CRM or some sort of system to organize your people.

I’ve written at length about why I love Contactually but use whatever works for you.

From there, make sure you have a way to categorize people that AUTOMATICALLY adds them to a follow-up plan.

And no, I don’t mean your company’s email drip system that will spam them to death.

Add them to a follow-up plan that actually fosters a relationship.

I’ve written a whole blog post for you about how to do it right here:

Following up with a system is GAME CHANGING.

6. Your networking is All About You

Continuing from #2, even if you are following up, your follow-ups are more irritating than they are anticipated.

“Hey, did you check out my company yet?”

Oh, and just to clarify…

If your marketing and messaging isn’t relevant and useful to THEM, it’s spam.

Let me say that again… If your marketing and messaging isn’t relevant and useful to THEM, it’s spam.

The example I always use here is if I were sending information about selling a home to someone who just rented a property, it’s spam.

If I sent info about selling a home to a homeowner who’s recently gone through a life change, THAT is valuable.

Just because you worked hard on your marketing doesn’t automatically mean they’re going to find it useful.

Make the people you meet look forward to hearing from you again by learning what THEY need and giving them what they want.

It’s as simple as that.

Quick favors that will make an impact for them are easy to do but deepen your relationship.

If you’ve read basically any of my other posts about networking, you already know that I’m in love with making introductions because it’s so powerful and so simple.

Yup, you guessed it… I have a blog post for that too!

You have already reported this .
Clear Clear All